Chairman of the CAMPO Group Advisory Board

He won the World Food Prize in 2006 for his work towards the development of agriculture in the Cerrado region; He led the Brazilian delegation in the FAO WorldFood Conference (1974 -1979); He was the Brazilian Minister of Agriculture (1974 -1979) and president of the National Confederation of Agriculture; He is among those responsible for the creation of EMBRAPA- The Brazilian Agricultural Research Corporation and of the “Pró-Álcool” Program (to substitute gasoline for sugarcane alcohol); He was the Minas Gerais State Secretary of Agriculture three times; Federal Representative for the State of Minas Gerais . In 2018, BNDES awarded him with the Developer Merit Medal for his work towards Sustainable Tropical Agriculture. 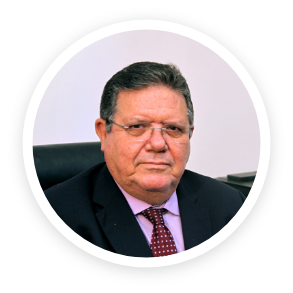 The CEO of CAMPO Group since 1992, he headed PRODECER and led the creation of CAMPO’s biotechnology and chemical analyses laboratories, while also being in charge of the group’s Strategic Agribusiness Consultancy. Previously, he held the position of Managing Director and CEO of the Paracatu Valley Agricultural Cooperative, as well as of Chairman of the French-Brazilian Cooperativism Chamber and of the Paracatu Valley Farmers’ Rural Credit Cooperative. He has received an honorary doctorate degree from the University of Coimbra in Portugal and has been awarded the Great Medal of the Rising Sun by the Imperial Government of Japan (2005). 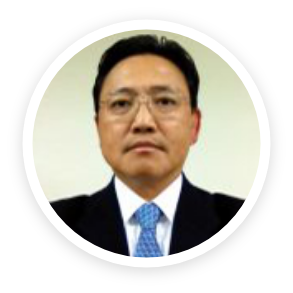 Mr. Saeki, the Vice-President of the CAMPO Group, has kept a close eye on CAMPO’s business dealings since 2019. At the time, he was an attorney for our Japanese partner, The Japan-Brazil Agricultural Development Corporation – JADECO, as well as being the legal representative of its partner, NIBRAGRO, since 2004. He has also been, since 1987, the senior partner of SAEKI ADVOGADOS law firm, which specializes in assisting Japanese companies in Brazil, as well as a legal advisor to the Japanese Chamber of Commerce and Industry in Brazil, since 2006, positions which allowed him to act as a liaison, helping to build CAMPO’s relationship with Japanese businessmen and the Japanese government. 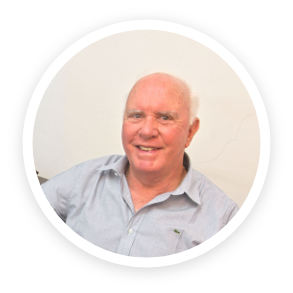 Senior Advisor to the Board of Directors

Mr. Melo has a BSc in Agricultural Engineering and a Master’s degree in Animal Nutrition. He was a Professor at the Minas Gerais State Rural University (UREMG) and coordinated the implementation of a livestock farming project in the town of Pirapora, in Brazil. He has also worked as an Agriculture and Livestock Technician at EMBRATER. At CAMPO, where he has been working as an Agricultural Engineer since 1980, he was responsible for coordinating the implementation of PRODECER’s projects in four Brazilian States: Bahia, Mato Grosso, Maranhão and Tocantins. Since 2011, he is the Senior Advisor to CAMPO’s Board of Directors, as well as the CEO of BRASAGRO. 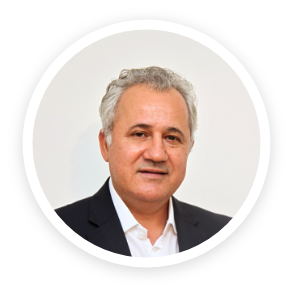 Mr. Ramos is a business manager who has been working with The Campo Group since 1983. He is CAMPO´s Financial and Executive Manager, CAMPOPAR’s Chief Financial Officer (CFO), CAMPO Consultancy and Agribusiness’ Executive Director, and BRASAGRO’s Business Advisor and Manager. He has also been the CEO of the “Fundação Casa do Cerrado” from 2010 to 2014.

Mr. Durante holds a BSc in Agricultural Engineering from the “Universidade do Oeste Paulista – UNOESTE”. He has also completed a graduate level specialization course in the Environmental Management of Agricultural Systems at the “Universidade Federal de Lavras – UFLA”. He has vast experience in agronomic activities, such as: providing technical assistance to associations and cooperatives, performing environmental and social analyses, and in the conservation of soil and of agricultural topography. He has worked for CAMPO since 1994, performing pre-project studies and working on the implementation of agricultural projects abroad in Venezuela, Angola, and Nigeria, as well as in the following Brazilian States: Pará, Maranhão, Piauí, Tocantins, Mato Grosso and Minas Gerais.

An Agricultural Engineer who has been working for CAMPO for over 20 years, Mr. Rizzi has overseen the performance of agriculture-related studies, as well as the implementation of major agribusiness projects (production and agro-processing) in Angola, Mozambique, Ghana, Uganda, and Venezuela. He has an MBA in Strategic Planning from the Getúlio Vargas Foundation and has been trained in hydrology and irrigation at Tottori University, in Japan. 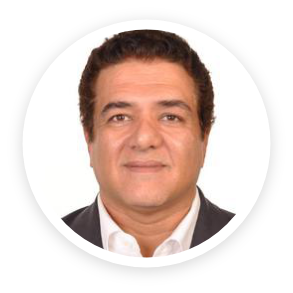 Mr. Trabbold has over 20 years of experience in business development and has participated in several international projects in different sectors. He has acted as an advisor and has participated in the strategic planning of companies and governments alike in order to aid them in the establishment of subsidiaries, in planning and controlling operating costs, in the development of new businesses and in finding investment partners. He has lived for 4 years in the USA, 1 year in China and 16 years in Angola. He is currently working with a total of twelve African countries.

Dr. Dias is an agronomist, with a master’s degree (Viçosa, Brazil) and a Ph.D. (Montpellier, France) in rural economics. He has a postdoctoral degree from Yale University’s Economic Growth Center (USA), where he conducted his research on the impact of technological innovations in agriculture. He worked as a researcher at The Brazilian Agricultural Research Corporation (Embrapa) from 1974 to 2020, where he also conducted performance evaluations and impact assessments, as well as implemented a Social Balance Sheet at their research centers. He has been working at CAMPO since October 2020. Here, he acts as a management consultant and advisor, helping us to plan, monitor, and evaluate the company’s projects. 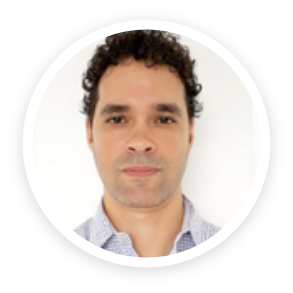 Mr. Araujo is a Licenced Geographer with a BSc in Geography from the “Centro Universitário de Brasília” – UniCEUB. He has completed a graduate level specialization course in Enhanced Geocoding of Rural Properties at the “Pontifícia Universidade Católica de Goiás” – PUC-GO. He also holds a Graduate Degree in Geoprocessing and Geographic Information System – GIS from the “Pontifícia Universidade Católica de Minas Gerais” – PUC-MG. He is the Coordinator of CAMPO’s Geoprocessing Center and has over 10 years of experience in Geoprocessing and GIS, working on projects in Brazil, Angola, Ghana, Mozambique, Nigeria, Uganda, and Venezuela.

Mr. Hass holds a BSc in Agricultural Egineering from the Federal University of Santa Catarina – UFSC. He has been working at CAMPO for over 30 years and specializes in the areas of: agribusiness consultancy, coordination and implementation of managed settlement projects, agricultural planning, and soil fertility, as well as contributing to the formulation of Master and Business Plans.

Mr. Torres holds a BSc in Geography from the University of Brasilia. He is a Geographer with over 13 years of academic background. He worked in the Management of the Technical Innovation and Feasibility Study of the Soybean Cultivation Project in Japan. He also worked as a Technical Manager to ensure Compliance with Environmental License Requirements for the duplication of the “Carajás” Railway, and in the Management of the Environmental Sector of the National Department of Transport Infrastructure. – DNIT, as well as in the duplication and restoration of the BR 101 Northeast Highway. Recently, he has been working on innovative ways to meet Environmental Requirements at the North-South Railway. 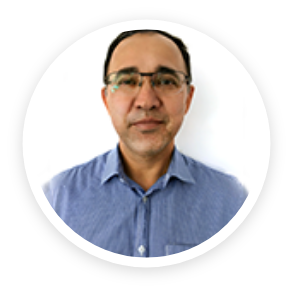 Mr. Ramos graduated from the Lavras Agriculture College-ESAL in 1993 with a BSc in Agricultural Engineering. He has been working for CAMPO for over 23 years in the areas of technology transfer, agricultural promotion at the Center-North Exports Logistics Corridor, and in the formulation of agriculture and livestock projects based on the Integrated Crop-Livestock-Forestry System. He has also worked in the PRODECER Program and abroad in Venezuela, Ecuador, and Equatorial Guinea.

Ms. Sardenberg has received her High School Diploma from the Rudolf Steiner High School, and began attending university at Hunter College –CUNY, as well as completing an internship at the Council of the Americas, all in New York City. Back in Brazil, she completed her undergraduate studies at the “Universidade de Brasília – UnB”, from where she graduated with a bachelor’s degree in International Relations, during which time she also spent a semester abroad at University of Westminster, in London, attended the summer school at Humboldt University, in Berlin, where she took the course “The International Protection of Human Rights”. She has also volunteered at the United Nations Conference on Sustainable Development – Rio +20, in Rio de Janeiro. Today, she is a business analyst and translator here at CAMPO, where she works on projects in Brazil and abroad. 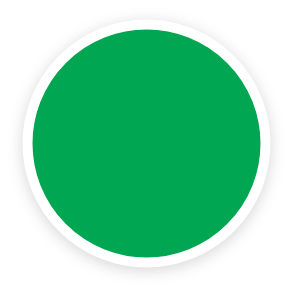 Mr. Inoue holds a BSc in Agricultural Engineering from the University of Brasília (1983). His areas of expertise include: consulting, agricultural planning, and the elaboration of integrated agricultural and agro-industrial development projects (Master plan and Business plan). He has worked on development programs and projects in Brazil (Prodecer), as well as in Venezuela and Mozambique (Prosavana). 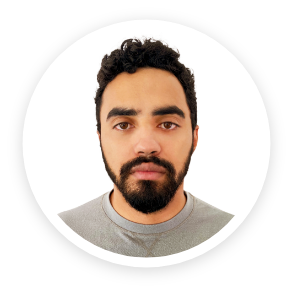 Mr. Costa holds a BSc in Agricultural Engineering from the University of Brasília – UnB (2020). He is currently completing his master’s degree in Soil Physics at the University of Brasília – UnB. He has experience working in agro-industrial consulting, in determining the technical and economic feasibility of agricultural projects, and in Geoprocessing.